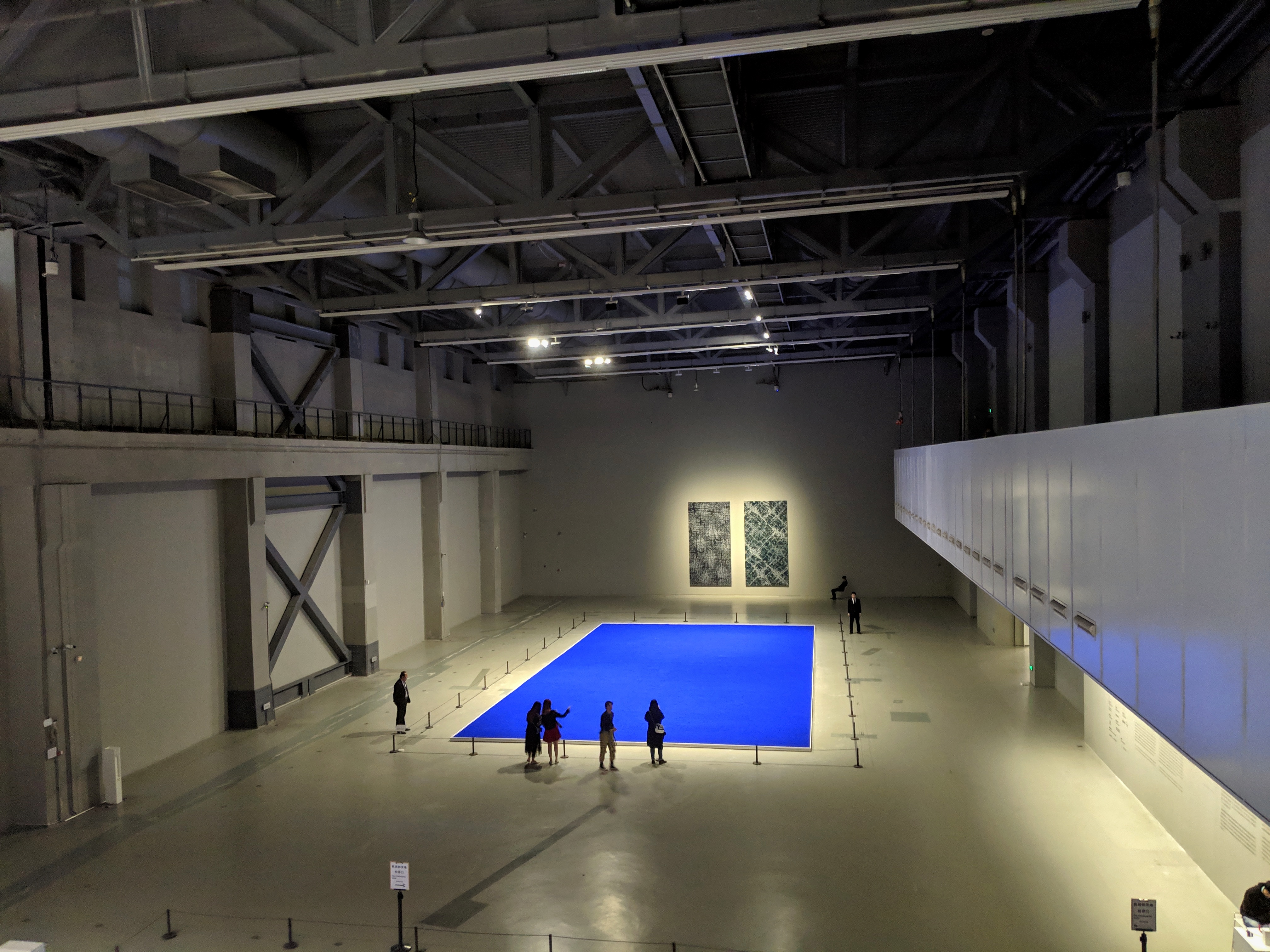 Blue has no dimensions; it is beyond dimensions, whereas the other colours are not… All colours arouse specific associative ideas… while blue suggests at most the sea and sky, and they, after all, are in actual, visible nature what is most abstract. – Yves Klein

Painting, or general art, was something that vaguely intrigued me since I was little, and probably the last thing my parents would like me to have a career in. Last week, “The Challenging Souls”, a modern art public exhibition, opened near my area. So I decided to give it a whirl, partly because of one French artist, called Yves Klein.

He is a man who is largely renowned for “inventing” a color, International Klein Blue. IKB is a shade of ultramarine blue that Klein developed and used profoundly to express the intangible and unnamable aspects of human existence that beguiled and fascinated him. He has adopted monochrome paintings to explore ideas of freedom and indefinite possibilities that are restricted by lines. For Klein, only the purest hue would evoke the innermost layer of sensations, without any vocabulary explaining it.

Interestingly, another reason I went to the exhibition was due to one of sci-fi series recently released on Netflix, called Love, Death & Robots: Zima Blue, which was adapted from the short story, of the same name, by Alastair Reynolds. 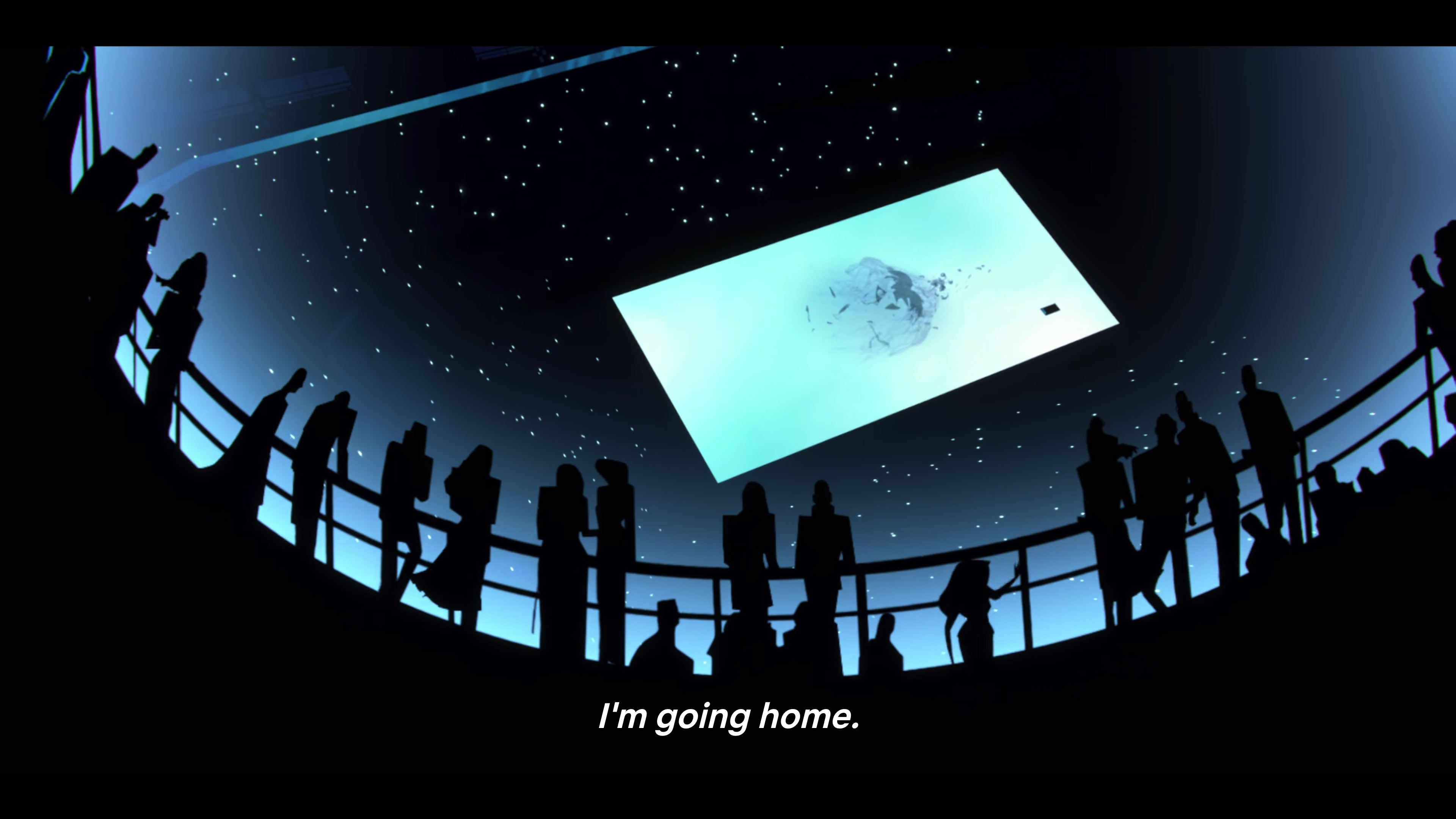 The story begins with an arts journalist who’ve got an exclusive, once-in-a-lifetime interview with the legendary Zima - a retiring modern artist about to unveil his final work of art.

Zima was already unique before he emerged into the public eye. And in order to further advance his understandings of the world and everything beyond himself as an artist, he had gone thourgh radical procedures to enable him to tolerate extreme environments like radiation doses that would have killed an ordinary man in minutes. His eyes had been replaced by cameras capable of distinguishing a large swathe of spectrum. He could see sounds as colors and hear music from visual data.

With all those transformations, he was able to freely seek insperations wherever he wanted, all but guaranteeing his art was undeniably original and spectacular. And yet, despite all his achievements, he was still unhappy and discontent, struggling to find truth and meaning throughtout his artworks. He felt his work said nothing about Zima himself. He found the universe was already speaking its own truth, far better than he could.

One day, he unveiled a giant mural of a luminous, starry nebula. In the center, blocking off part of the nebula, was a tiny, blue square, later known as Zima Blue. After that, Zima continued to release to the public paintings with a different geometric shape, but that precise shade of blue was always the same. Before very long Zima unveiled the first of his entirely blue murals that could cover the side of a thousand-story building. As the blue became more intense, more dominant, Zima felt he was closer to an answer.

On the day of the announcement of his final work of art, Zima walked the journalist to a swimming pool. The pool was surrounded by ceramic tiles in that exactly same blue. The journalist scratched her head wondering what it had to do with his final performance.

It turned out long ago that the swimming pool was belong to a talented young man working in Silicon Valley with an interest in practical robotics. The man had been one of many groups and individuals cracking the hard problems of artificial intelligence. He, as a hobbyist, had created many simple domestic robots, each designed for a particular task. One of those lived in his swimming pool, toiling endlessly up and down and along the ceramic sides of the pool, scrubbing them clean.

And this was where Zima began - a crude little machine with barely enough intelligence to steer itself around a swimming pool.

He was so fond of the robot cleaner that he later gave the robot full-colour vision system and a brain large enough to process the visual data into a model of its surroundings. He allowed the robot to make its own decisions about the best strategy for cleaning the pool. After many years of iterative testing and development, it became the cleverest of all his creations.

As Zima stood at the edge of the pool, telling the journalist the story of his origin, he dived into the pool, immersed himself into the blue, slowly unravelled his body parts, shut down his higher brain functions, left just enough to appreciate its surroundings, to extract some simple pleasure from the execution of a task well done. His search for truth was ultimately finished.

The ten minutes animation fantasy had me completely startled in silence as it approached the end, revealing a seemingly trivial and yet overwhelming truth: the simplest thing from the very beginning is the only thing that holds the most accomplished enlightenments. This extends universally to both corporations and individuals.

Let’s take Facebook, which was originally served as a social-networking platform that intended to connect families and friends around the globe. However, in the course of it growing into a behemoth corporate giant, some careless deviations have taken quite a toll on its creditability, be it privacy infrigement issues or oblivion to misinformation flooding its website. Its market value took a dive. #boycottfacebook movement swept Twitter. Admittedly, companies make money by definition. Nobody would disrespect a company that yields a substantial fortune as long as it does socially good to its community. Otherwise it’d not be very long before them vanishing from the public eye.

As for personal implications, it’s getting a bit more complicated. We brought nothing to this world when we were born as infants, and we can’t take anything with us when we leave it. Our primary goal from day one is to survive. Without that premise, everything comes down to naught. On the other hand, survival is not the only purpose. Unlike robotic machines made out of bare metal, We desire to be in love with our family, spouse and friends. We are hardwired to feel committed to contributing to the society, and making the world a better place each and every day. We grow as we make the best of the merits and limits we’re endowed with and achieve self-worth thereby.

But still, the world is never perfect. Life is riddled with hardships and things way beyond our control. Yet laser-focusing on targets, going to great lengths to battling against adversities in every possible ways, sometimes we forget what we originally were, drifting further away from the missions that we devoted ourself to from the very beginning. We become more miserable and less fullfilled. This is analogous to what happened to Zima undergoing dramatic transformation to level up skills and capabilities. By reverting back to the original mindset, it allows us to put things into perspective anew, examine the biases that lock our thinking, and look at why we’re doing it in the first place.

You might wonder, well, does that mean in order to lead a happier life, you should give way to all the woes and sufferings life gives you when you’re fighting for a course? Does reducing youself to executing mundane tasks nonstop, like a cleaner robot, gives you any sense of fulfillment? Will basking in the sun in a folding beach chair while eating mangos and twiddling your toes all day long makes you anymore self-worthy? Probably not. So the way out?

I honestly do not know. There is no progress without struggle, just like there is no crops without plowing the ground before sowing the seeds. These are the hard facts we can’t change, but what IS under our control is the way we mentally approach the issue. Maybe next time you’re complaining about unfair social security policy reforms, or lamenting why your kids didn’t make it to the right kindergarten in your local district, or your sophisticatedly crafted machine learning model not converging after training it day and night, make a switch to your frame of references. Think about those men and women living and fighting in a warzone with barely enough food to feed. Think about children deprived of basic education rights in underdeveloped countries. Count little blessings as often as possible. Be grateful you’re even alive breathing today, that you have clothes to wear, food to eat and a place to sleep, that you’re lucky still being in touch with your best friends from third grade, and that after a working day your loved one prepares a nutritious meal waiting for you to come home. Why?